Historical steam engine is being brought back to life 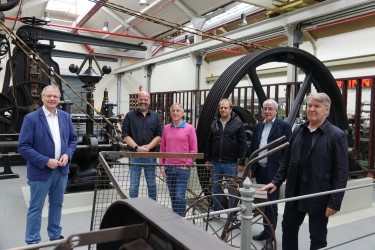 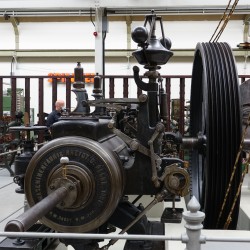 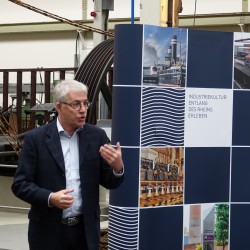 October 6th, 2021: At the TextilTechnikum in Mönchengladbach, a historic steam engine was "brought back to life" at the beginning of October: The engine, which weighs several tons and dates from 1901, was still in operation until the early 1980s and was now to be set in motion again several decades later as an exhibit of the Textile Museum.

Hepp-Schwamborn was able to make a significant contribution to this ambitious project, which had to do without steam for pragmatic and above all safety reasons, in the form of the design and implementation of an electric drive.

During the inauguration ceremony, the initiators and supporters of the project spoke about the history of the machine, the importance of the textile industry for the city of Rheydt and reported on the difficulties and obstacles encountered during the demanding course of the project (see picture, from left to right: Sven May, principal of the vocational college Rheydt-Mülfort for technology, Holger Hellwig, textile technician of the TextilTechnikum, Helmut Wallrafen, managing director of the Sozial-Holding of the city of Mönchengladbach, Kevin Dippel, student at the vocational college Rheydt-Mülfort for technology, Kuno Schwamborn, managing director of Hepp-Schwamborn as well as Dr. Karlheinz Wiegmann, museum director of the TextilTechnikum).

All those interested can listen to the radio report on the inauguration, which was kindly made available to us by Radio 90,1 Mönchengladbach, under this link.