Effertz - Tradition in the limelight 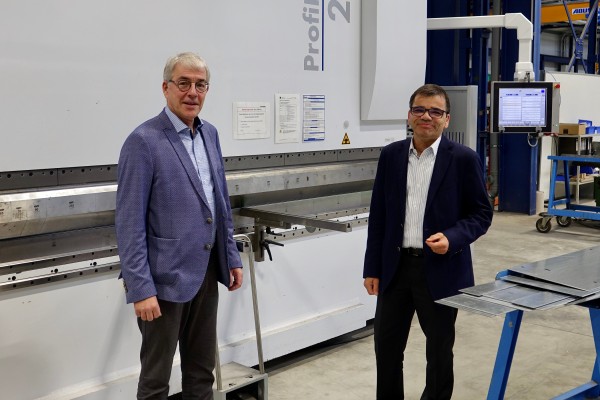 On the occasion of this planned expansion of the production halls at the Effertz Tore GmbH company's headquarters in Mönchengladbach-Rheydt, Effertz found a competent and trustworthy partner in Hepp-Schwamborn, who, thanks to the long joint company history, was more suitable than any other for the close cooperation on this extensive construction project. 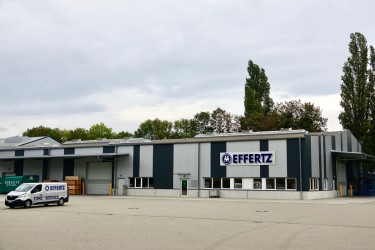 The exterior lighting of the Effertz Tore GmbH company site was also realized by Hepp-Schwamborn as part of the order for the production halls.

"My grandfather already worked with the father of the current managing director of the Hepp-Schwamborn company, Mr. Kuno Schwamborn," recalls Dr. Claus Schwenzer, managing director of Effertz Tore GmbH. "But there have also been instances of our trustful cooperation in recent times. For example, we had to prove that all safety criteria are properly met for the safety acceptance of a large-format fire protection roller shutter door - intended for a cruise ship - even when the door is set out in an inclined position in high waves. What could be more obvious than asking Hepp-Schwamborn to provide us with one of their halls with a ceiling height of 8 meters for this purpose. This was necessary to allow it to be attached to the beams of the hall ceiling at a certain angle of inclination. It is such uncomplicated assistance that has always characterized the trustful cooperation between our family-run businesses.” 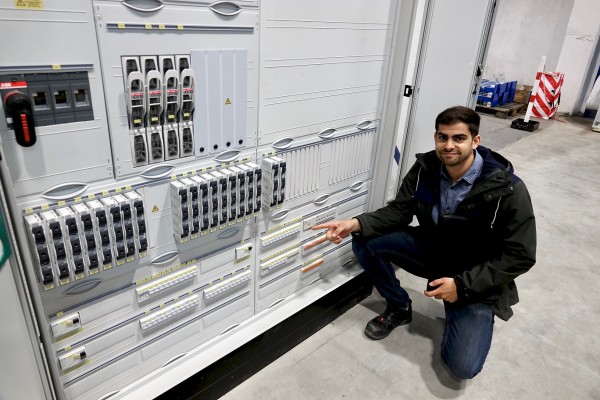 Project manager, David Beckers, from Hepp-Schwamborn presenting the planning, construction and installation, which he was responsible for, using the example of one of the switch cabinets he built and installed himself, wherein countless meters of cables from large parts of the hall converge.

During the extensive expansion of the production halls, Hepp-Schwamborn was not only responsible for the realization of the network technology and lighting equipment, but also took over the planning / conception of the power distribution and the installation of the switch cabinets. Hepp-Schwamborn received, in advance, a layout of the planned production hall from Effertz, from which the desired later positions of machines, gates and service sockets were determined. Based on these specifications, an application-oriented energy distribution concept was developed that takes into consideration the total amount of electricity, cable diameters and all lighting calculations.

What is particularly impressive is the extensive, automated, and thus highly efficient lighting concept, which was specially tailored to the conditions of this production hall and mounted below the hall ceiling using partially flexible mounting systems. The Hepp-Schwamborn employees had to prove their many years of experience, especially when installing platforms for cable routing or strips for attaching the ceiling lamps, as David Beckers, the responsible project manager, explains: 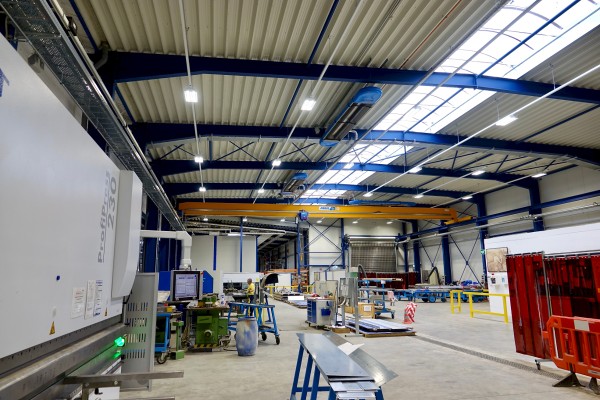 "Due to the transverse steel girders under the hall ceiling, we had to use so-called "wide span gutters” along the long side of the hall, which are characterized by wide support spacing and therefore need to be supported much less frequently. We were able to use conventional cable platforms running along the girders, which are supported at shorter distances. For fastening, we had to resort to a clamping technique with metal clamping claws, which are only clamped and screwed. In this way we avoid drilling into the steel girders for safety reasons.”

The production halls of Effertz Tore GmbH with a sophisticated lighting concept: cable platforms running on the ceiling as well as wide span channels, dimmable industrial lamps with brightness sensor for automatic regulation of the required lighting intensity depending on the incidence of daylight and the application in the respective hall section. 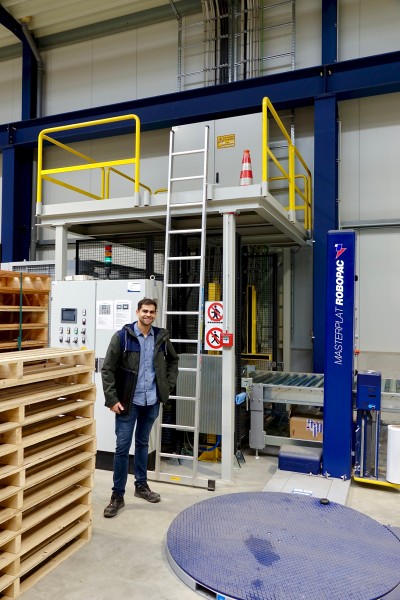 The Hepp-Schwamborn employees were also able to combine their expertise with the required flexibility in other areas: When Effertz was compelled to change the position of a stationary machine, deviating from the original planning, it collided with the positioning of a control cabinet in the affected production section. On the one hand, the routing of all power and data cables as well as the corresponding cable platforms were exactly matched to the positions of the switch cabinets, and on the other hand, all cables had already been laid to the corresponding point. To avoid costly changes or large-scale planning changes, and to avoid unnecessarily delays to the completion of the construction work, the switch cabinet was simply moved a few meters higher - by erecting a stage of about three meters high. In this way, the cables running on the ceiling could be laid without any problems to the now higher switch cabinet, while the equipment below remained freely accessible. For optimal occupational safety, technicians carrying out any maintenance works on the platform at a height of several meters are protected by a circular steel railing which shields them.

The approximately 3m high custom-made stage, which made it possible to relocate the switch cabinet while also positioning the machines below, impressively proves the flexibility of Mr. Beckers and his team.

A further safety-relevant aspect is provided by the striking light sheds on the hall ceiling, which open in the event of a fire by means of compressed air, thus allowing heat and smoke to escape. Hepp-Schwamborn incorporated the incident daylight into the lighting design: The LED hall lights used always adjust the lighting produced to the ambient brightness and thus ensure constant illumination at any time of day with the lowest possible use of energy. The lights are connected to each other and to the built-in brightness sensors via a DALI bus. In addition, they are manufactured for industrial use and always remain functional even at high temperatures, such as those that regularly occur under the hall ceiling during summer. 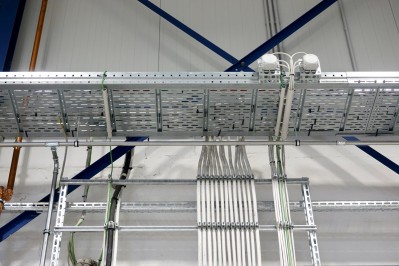 „Compared to the 400 watt luminaires that was commonly used in the past, the Zumtobel LED high-bay luminaires we use today require only a quarter of the electrical connection power," adds Kuno Schwamborn, Managing Director of Hepp-Schwamborn GmbH & Co. KG. "If you also take into consideration the lighting control and daylight utilization via the light sheds, the required power again drops to only 15-20% of the original value".

Carefully laid cables as a quality feature: data and power cables are laid from the control cabinet to the cable platform by a specialist company.

The intensity of the desired lighting is not left to chance either, explains David Beckers: "Depending on the intended use of a hall area, the regulations regarding brightness specifications can also be change. An area used purely as a storage area, for example, only needs to be illuminated with 50 - 200 lux, while a work area will need to be illuminated with 500 lux. As soon as we move into small parts production, we even talk about 700 lux. Accordingly, we have adjusted the brightness of the luminaires depending on their distance from each other and their location so that the intended minimum illuminance is always achieved, even with strong daylight incidence and the lowest possible lamp brightness." 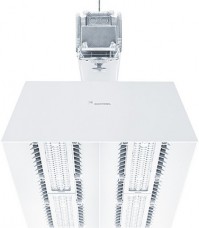 The "CRAFT L" type LED high-bay luminaire from Zumtobel, which was specially manufactured for demanding industrial applications, was used.

All control functions run via a KNX system, which makes it possible to program or assign any functions to switches and thus, for example, to switch the lights on or off in entire sections of the hall with just one switch - and from any position. 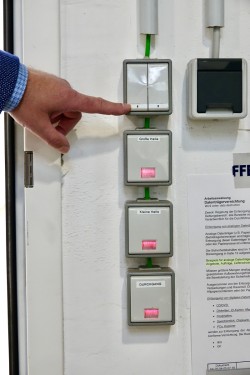 In addition to the pure energy and lighting technology, Hepp-Schwamborn also installed the entire network technology including data cabling. As a result of the great distance from the server to the warehouse office, a fiber optic connection was used here.

In combination with the energy and lighting technology, this results in a homogeneous whole within the new production hall, which will not only allow Effertz to work much more energy-efficiently in the future, but also to automate the lighting control at sensible points. And always being in full control.

The KNX system used enables the free programming of any functions for the push buttons. 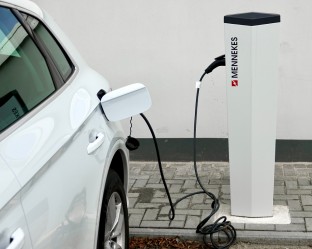 In any case, managing director Dr. Ing. Schwenzer was highly satisfied with the execution of the project by Hepp-Schwamborn and is already looking forward towards further cooperation.

Future-proof locomotion: Hepp-Schwamborn also carried out the installation of two large electric charging stations from Mennekes in the inner courtyard of the company building.