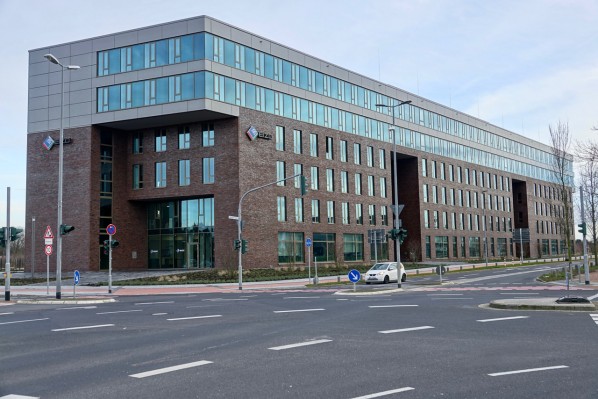 For years, the Nordpark industrial estate, located only three kilometers away from Mönchengladbach's city center, has already enjoyed great popularity among national or internationally operating companies and investors alike.

The GEBAB corporate group, a large German investment company, is setting special trends here: already at the end of 2018, it was responsible for the "Paspartou" located at the entrance area of the Nordpark - a business center consisting of two towers, which offers up to 700 workspaces on around 9,000 sqm of usable space. The renowned investment company, which has made a name for itself primarily as an issuing house for shipping funds, is also gradually becoming involved in the commercial real estate sector. 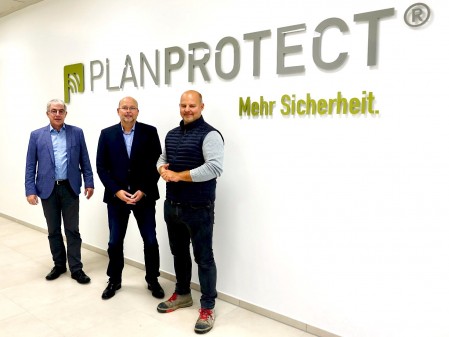 Consequently, the construction of a further six-story office building with a total leasable area of 17,500 sqm on Liverpooler Allee began in spring 2019, just a few months after completion of the "Paspartou". The building complex was erected on a 7,300 sqm site in the so-called "Business Park II", which is situated in the eastern area of the Nordpark.

The persons responsible for electrical engineering and the realization of the Liverpooler Allee 32 construction project, together with the representative of one of the first, major tenants (From left: Managing Director Hepp-Schwamborn, Kuno Schwamborn, board member of PLANPROTECT AG, Ralf Battige, and Markus Brütsch, managing partner of the GEBAB corporate group). 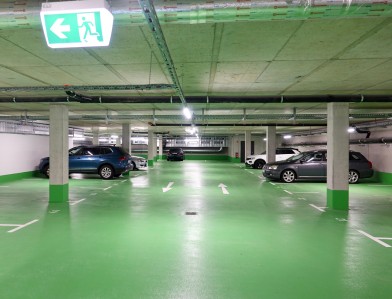 In addition to the excellent transport links via the A61, the parking situation is also more than satisfactory with the 200 parking-space-underground lot, optionally available outdoor parking spaces, as well as a parking and charging facility for e-bikes located in the building, making it an attractive location for many companies and their employees. The building has two main stairwells that divide each building level into a maximum of four rental units - each with its own kitchenette, sanitary facilities, direct stairwell access and the option of separate measurement and billing of the respective energy consumption.

The underground parking garage provides parking spaces for employees' vehicles, and cable platforms through the ceiling carry power and data lines from the adjacent distribution center to their destination within the six-story building. 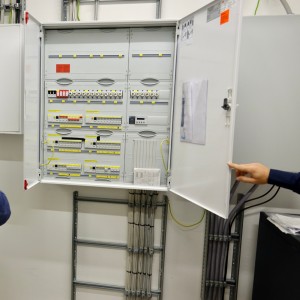 Due to the modular implementation, it is also possible for a company to rent several such units on one floor and have them billed as a single unit. In this way, the individual wishes of every potential tenant, with regards to the available space, can be met, whereby the electricity/energy supply is just as modular as it is uncomplicated.

The sub-distribution system for the individual rental areas ensures that the energy consumption of each individual party is accurately billed.

As before with the "Paspartou", Hepp-Schwamborn was awarded the contract for the realization of all electrotechnical measures for the Liverpooler Allee construction project. This includes the power supply via a transformer station in front of the building, all power distribution measures and installation work for the tenants, the complete lighting of the property as well as the entire outdoor area. 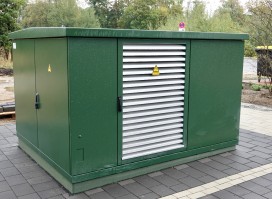 Hepp-Schwamborn's tasks also included the installation of a comprehensive fire alarm system and a security lighting system. The supply of general electrical consumers such as the ventilation and air conditioning systems as well as the elevators was also part of the task package.

The transformer station located outside the building conducts the electricity to the distribution center located in the underground car park. 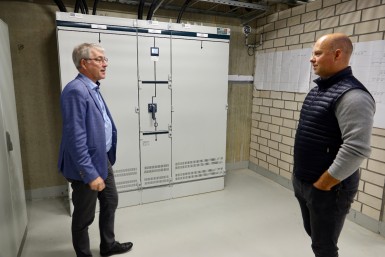 Particularly noteworthy here is the installation of the elaborate metering system, which enables the previously mentioned separate electrical billing of each individual rental area. The three rental units occupied to date - the special monitor manufacturer, EIZO; the security company, PLANPROTECT; and a private sponsor's daycare center for children - each use their own meter panel in the distribution center located above the underground car park.

Kuno Schwamborn and Markus Brütsch talking at the distribution center, which is accessible from the underground car park. This is where not only the energy from the transformer station located in front of the building is routed, but also the separate metering for the electricity consumption of each individual tenant and the supply line to the corresponding floor.

"It is little things like the careful labeling of each individual meter field or the neatly fed cable harnesses that distinguish Hepp-Schwamborn's work," emphasizes Markus Brütsch, managing partner of the building owner GEBAB. "Details like these may not be too noticeable at first glance, but you simply would not find them in such quality elsewhere. At these and other points, it simply becomes clear that Hepp-Schwamborn comes from the field of industrial and plant engineering and thus brings with it a correspondingly professional expertise. The robustness of the design and the quality of the installation simply stands out positively in comparison to many "conventional" electrical engineering companies."

Switches and sockets with unique labels. 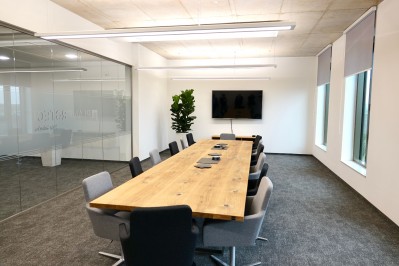 Intelligent solutions were also found in other areas due to the many years of experience in this sector: For example, in connection with the specific usage requests for rooms of a future tenant, which cannot always be foreseen in advance. For example, the building has a raise cavity floor under which energy and data lines were laid at regular intervals. Depending on whether a tenant ultimately prefers open-plan or individual offices, or where workstations are to be set up, it was thus possible to open the floor at specific points for the installation of a floor tank - exactly where power and network connections are needed.

The geometry of the building allows for flexible room designs:

A meeting room with media technology 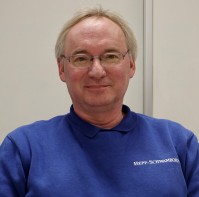 Other measures included the implementation of a fire alarm system and an access control system via video intercom. This allows each modular unit to grant access to the building at its own discretion - in theory up to 23 different tenants. In addition, a further security concept is being planned that will synchronize the internal video intercom and the external surveillance systems.

In his function as project manager for building services engineering at Hepp-Schwamborn, Thomas Lersch oversaw this major project. His department alone was responsible for more than 2,000 hours of project management and construction management. 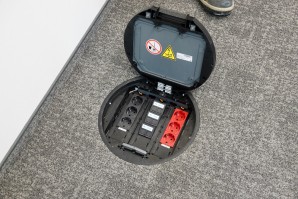 The modular data network in the building, which was also implemented by Hepp-Schwamborn and uses exclusively shielded Cat 7A cables for the highest data transmission rates, can be optionally separated or combined depending on the number of rented building units for a tenant. 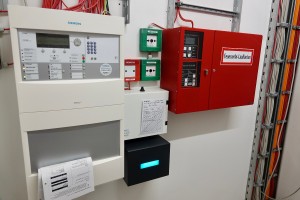 The area-wide safety lighting system was installed in function maintenance in accordance with the requirements of the fire protection concept.

The installation of the area-wide fire alarm system was also one of Hepp-Schwamborn's tasks. Through the course of the installation work, 1,400 fire detectors were installed. 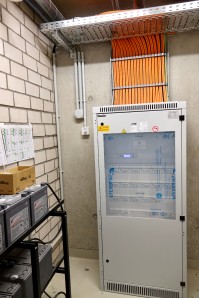 Hepp-Schwamborn's work is not finally completed even after the building has been structurally finished, as individual wishes of further, future tenants are continuously taken into accounts and implemented.

One example of a company that has somewhat specific requirements - particularly with regards to safety-related aspects of laying power and data cables - is the tenant PLANPROTECT AG in the Liverpooler Allee. Originally based in Güdderath, the company specializes in the service concept of real-time monitoring, whose services are not limited to the installation and maintenance of high-quality monitoring hardware on site, but above all offer real-time monitoring to be able to thwart a break-in within the shortest possible time - and this at a distance from the highly secure workplace in the premises at Liverpooler Allee 32.

The control cabinet for the safety lighting is found in a separate and specially protected room, whose fire resistance must be ensured for at least 90 minutes.. 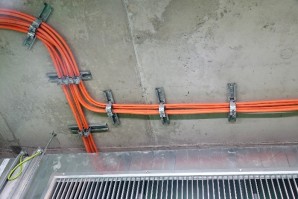 PLANPROTECT's high security requirements only became known during the construction phase: The rented premises were to meet the requirements for a VdS-certified security center, which for Hepp-Schwamborn meant, among other things, laying redundant as well as specially protected cabling.

For fire protection reasons, the orange-colored function maintenance cables are laid at close mounting distances and ensure that the safety lighting is maintained in the event of an emergency. 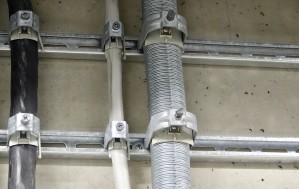 Certain cables even had to be laid in a "sabotage-proof" manner - within a steel armored conduit.

The cables laid in the sheet metal sheathing meet a double requirement: The E30 type cables are manufactured in such a way that they can withstand the effects of a fire for up to 30 minutes. At the same time, the cables protected in this way are considered sabotage-proof thanks to the additional sheathing. 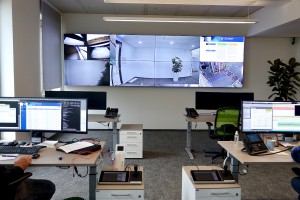 To ensure the safety of PLANPROTECT's customers even in the event of a power failure, not only was a completely uninterruptible and sabotage-proof power supply installed, but an emergency generator was also erected on the roof of the building complex to provide a completely self-sufficient power supply, if necessary.

The security control center of PLANPROTECT AG is where all the threads come together in the real-time monitoring of its customers. Security is also a top priority for the company's premises: for example, the control center has bullet-proof windowpanes weighing several hundred kilograms.

Ralf Battige, board member of PLANPROTECT AG and contact person for the IT and customer service, praised the fact that he was more than satisfied with the planning, communication as well as the execution of the work by Hepp-Schwamborn, and did not described the company’s 1,400 sqm rented office space, without a bit of pride, as "the safest premises in all of Mönchengladbach".

Uninterruptible power supply in redundant design through the operation of two UPS systems. 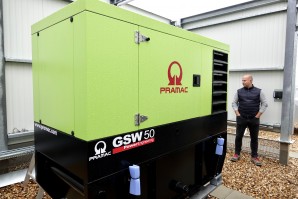 PLANPROTECT AG's emergency power generator, which can only be accessed via the roof, is located at a lofty height, and securely encased, enabling the company to independently supply itself with electricity over several days.